The April 2017 Virgo Horoscope forecasts that until the 20th, there will be lot of frenetic action around you and it requires great effort to remain poised. After that things will cool down and there is a sense of sanity.

The April 2017 Mercury retrograde will be beneficial for the Virgo sun sign. This will remove most of the obstacles in your life. The Eclipse will make positive changes to your spiritual and religious practices. Social work and humanitarian efforts will undergo major alterations. The Virgo personality’s general outlook on sex will be subjected to major transformations.

The Lunar Eclipse of April 2017 will impact Virgo students and their academic environment with important changes. Your neighbors will be forced to make significant alterations in their lives. This month is ideal for chasing your academic interests and travel plans. The Virgo born people can spare their time for intellectual development and understanding of self. 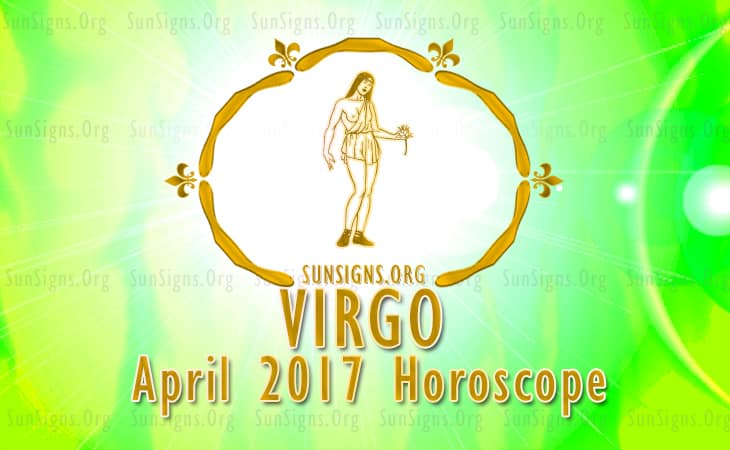 The Virgo relationships at work will be excellent in April 2017. Social contacts will play an important role in your business. Maybe you will find the right person who can give you a promotion at work. You can look forward to a raise or promotion in April 2017.

The zodiac 2017 predictions foretell that finances are wonderful this month for the Virgins. You will have spare money to clear your old loans. Monetary situation of your spouse or partner is very sound and will help your finances. Helping others to grow financially will result in higher returns for you, Virgo.

Cut down expenses and reduce costs until the end of April 2017. There may be financial fights with your partner on tax problems and there will be a general agreement in the end.

There will be longstanding changes in the monetary plans and revenue of your life partner in April 2017. Dealings in real estate and governmental issues will start making a progress.

The Virgo April 2017 monthly horoscopes predict that love is excellent towards the end of the month. There is more romance than sensuality in love affairs. Love is to be found during travel or while pursuing educational activities. This is also a good month for the Virgo woman to get pregnant.

The Virgo horoscope for April 2017 foretells that diet and detoxification will enhance your health enormously. Your personal charm is at its peak and your libido is high. You will paying attention to the spiritual aspect of life and are trying to explore the real meaning of life and death.

The Virgo April 2017 horoscope predicts a favorable month with respect to career, money and love.