Scorpio Horoscope for April 2017 predicts that the House of Family is stronger. Hence professional matters will not be in focus this month for the Scorpio zodiac sign. Domestic issues and the emotional aspect of your life will be dominant. You can review your career plans and keep your blueprint ready for action in days to come in April 2017.

Scorpio, others interest in your issues will bring you more contentment and a sense of accomplishment. Personal enterprise and ambitions will not be important in April 2017 for the Scorpions. Adaptability and cooperation from others will help you to attain your goals. 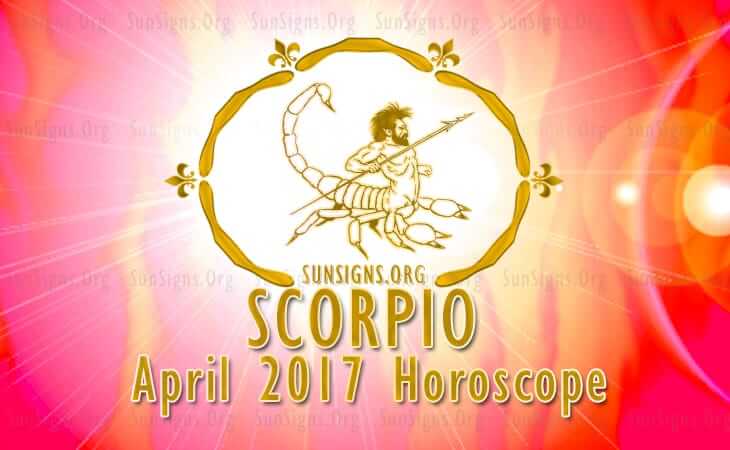 The Mercury retrograde of April 2017 will bring changes in your profession, Scorpio. Career will become more important after the eclipse. The Eclipse may result in corporate changes which may result in modifications to your job profile and seniority. You may even go for a new job or start a new business. You will be able to achieve your targets in your career effortlessly.

The April horoscope 2017 foretells that unemployed Scorpio natives will be successful in getting a job offer this month. Career can be enhanced by hard work and through social networking.

The astrology forecasts for 2017 foretell that many monetary openings present themselves to the Scorpio personality this month. But planetary aspects are not favorable for pursuing them. They require more research and will take time to mature.

The April 2017 Scorpio monthly predictions show that love will be available in plenty for singles this month. You will be looking for love in higher social circles and you are interested in persons who are rich and influential.

Health will cause some problems for the Scorpio born towards the end of April 2017. Work smartly and eliminate the unimportant stuff to preserve your vitality. Emotional health and family happiness will impact your health positively.

There will be transformations in your personality and self-image, Scorpio. Your way of dressing and your behavior with others will become different in the month of April 2017.