Sagittarius April 2017 Horoscope forecasts that the House of Family is more powerful than the House of Career. This is the time to attend to domestic problems and to enhance your psychological stability. Career success is dependent on your emotional well-being. Right now career takes a backseat this month for the Sagittarius zodiac sign.

Other people and their prosperity will be more important than personal ambitions and free-will in April 2017 for the Sagittarius personality. It is advisable to take the advice of others and adapt yourself to situations. Compromise and partnerships are the keywords to succeed in your objectives.

During the first half of the month, the Sagittarius born will have unlimited buoyancy and dynamism. Your originality will be at its peak and you can accomplish whatever goals you set sight upon in April 2017. 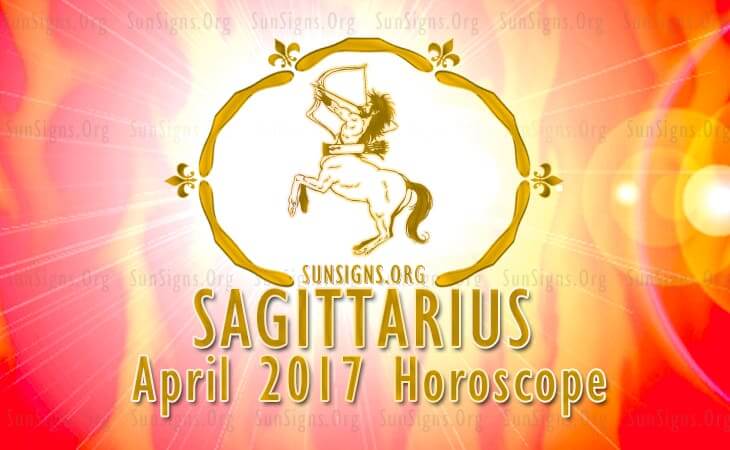 The horoscope 2017 predictions forecast that the career environment will be excellent for the Sagittarians in April 2017. You will have cordial relations with your colleagues. You find work to be a party. After the 20thof April 2017, you business might become more demanding.

The archers seeking employment may land overseas jobs in April 2017. Academic environment will provide many opportunities. Get your 2017 Rashifal.

The April 2017 horoscope for the Sagittarius sun sign forecasts that money will flow in with more hard work. Financial intelligence will be good and you are clear on your strategies to earn more money. Money making becomes more effortless. Speculation should be avoided till the last quarter of the month.

Family atmosphere for the Sagittarians is highly inflammable in April 2017 and it requires lot of effort to maintain peace in the family. Your house will undergo major maintenance work and renovation. New apparatus for sports and entertainment are likely to be bought. The Sagittarius relationship with children will be under review. You will make sincere efforts to get along with them.

Single Sagittarians will find love in social gatherings and while holidaying. Love is more fun and commitment is lacking in marriages.  Pregnancy related health issues will need to be taken care of in April 2017.

Health will be wonderful this month in April 2017 for the Sagittarius. Your energy levels are very high. Get rid of your coffee addiction and manage your high blood pressure for a good life.

The Sagittarius April 2017 monthly horoscope foretells that you need to be emotionally strong if you wish to keep the different aspects of your life in order.