Pisces April 2017 Horoscope predicts that this month will affect those following an academic career. There will be major alterations in the subjects you study or a change over to a new institution. The future educational career of the Pisces zodiac sign may be modified to a great extent.

Pisces, spirituality and financial affairs will occupy your attention in April 2017. Till the 20th there will be hectic activity in your life and after that life will become more peaceful. You may travel extensively inside the country. 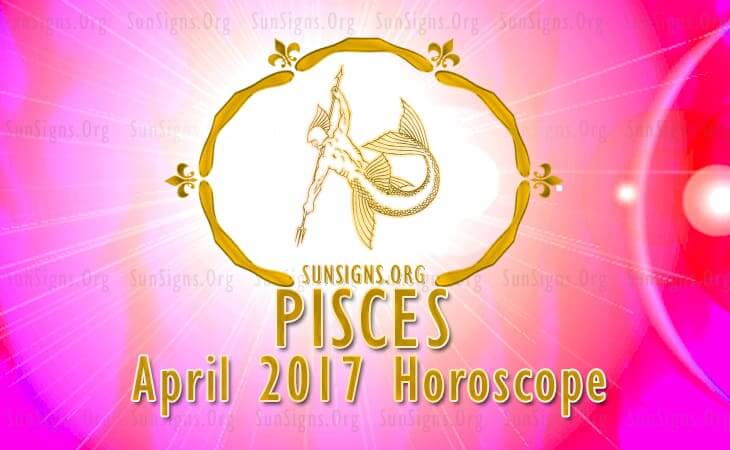 The Mercury Retrograde of April 2017 will affect the Pisces professional life. There will be changes in the present job environment or you may even move over to a new business or a new career.

The astrology 2017 predictions forecast that finance will occupy the centre stage this month for the Pisces personality as the House of Money is very powerful. You financial strategies will undergo major transformations and serious defects will be removed. Monetary health improves drastically after the corrections. Your financial intelligence will be very strong this month.

Money flow will come or the Pisces born in April 2017 from profession and dealings in health related activities. Finances can be enhanced through social contacts and by sales promotion. Finances will become steady by the end of April 2017.

The April 2017 Pisces monthly horoscope foretells that love will become smoother after the first quarter of the month. As planetary aspects are not favorable, you have to go slow in forming love partnerships. Love and romance is more materialistic this month and you are looking for rich partners.

Pisces relationship of parents with children may be volatile and will be affected for some time. You may have problems with a close family member and things will take time to get sorted out. If you are contemplating to buy a house or take a home loan, they should be done before the mid of April 2017. If you are planning to get pregnant, that too requires some thought.

The Pisces health will be fabulous throughout the month of April 2017. This can be enhanced by exercise and massages. Drink milk, water, buttermilk and coconut water every day .

The April 2017 horoscope for the Pisces zodiac predicts a month of materialistic tendencies in your personal life and profession.