April 2017 Gemini Horoscope forecasts that the House of Career is more dominant than the House of Family. Hence career will be more prominent than domestic issues and psychological concerns for the Gemini zodiac sign. Family will be important and any problems that arise can be tackled from time to time in April 2017.

April 2017 will be favorable for the Twins till the start of Mercury retrograde. You can then execute your plans which you have thought of earlier and your bold actions will yield positive results. Gemini, you can be independent and others will follow suit. 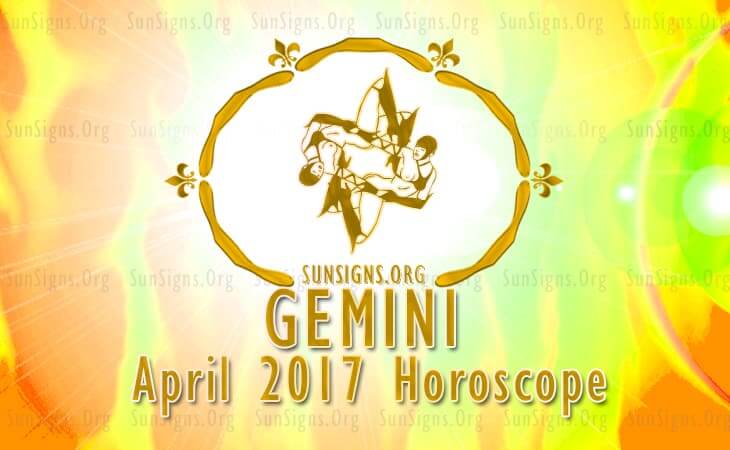 The April 2017 Gemini astrology predictions foretell that significant modifications will occur at the work place. Businesses run by the Gemini personality employing people are expected to come under the impact of the Lunar Eclipse in April 2017.

The 2017 zodiac forecasts for the Gemini predicts defects in your existing strategies of finance will be exposed. You can take necessary curative measures to rectify the problems in the April month of 2017.

Monetary situation will be quite daunting for the Gemini born in April 2017. But it eases towards the end of the month with improvement in money flows. Reducing expenses and creative use of the present finances will help the situation. Money can be made from profession and from providing service to others in April 2017. Gemini, speculative investments should be put on hold for the time being.

Gemini, your relationship with friends and associations of which you are a member will be under review in April 2017. Decisions have to be taken on the status of friendships. Your social groups will be under lot of turmoil, and clarity will emerge in the end as to your association with these groups.

The 2017 monthly forecasts suggest that love relationships for Gemini compatibility will be complex and hazy till the 12th of April 2017. There will be extreme divergences of opinion with your love mate. If the foundation is strong, the partnership will survive, otherwise break-up is possible. You should not hurry into marriage if you are already in a confirmed relationship. Allow love to blossom slowly. The same goes for pregnancy.

Health routines and diet regimes for the Gemini in April 2017 will be affected till mid-month. Overall, health will be wonderful during the month. Using stevia instead of sugar can prove to be fruitful.

The Gemini April 2017 horoscope predicts a month when a few difficulties with money might be seen but nothing that cannot be taken care of.