Capricorn April 2017 Horoscope forecasts that this will be a month when you will be your own boss as well as listen to others. When the eastern half of your birth chart is powerful Capricorn, you can use your personal initiative and concentrate on your ambitions. When the western half is strong, you have to seek the cooperation of others and you have to be flexible.

The Solar Eclipse of April 2017 and the favorable position of planet Jupiter may result in either buying or selling of a house. Family environment will be volatile and various defects in the family set up will be thrown up. This gives an opportunity for the Capricorn zodiac sign to rectify the situation.

The mercury retrograde of April 2017 will also transform your character and personality. There will be marked changes in your personal appearance and dress sense. The month of April 2017 is an ideal period to detoxify your body. 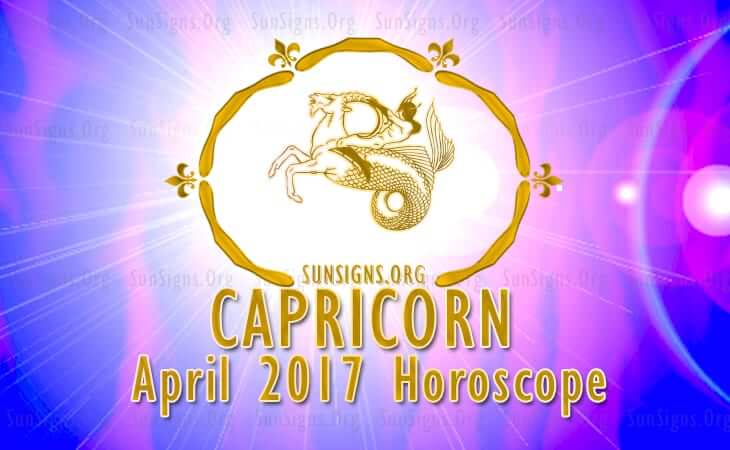 The Capricorn born will have an auspicious month when it comes to career and business. The 2017 zodiac predictions forecast that April 2017 will be hectic and full of activity on your professional front. You work and business ideas will be appreciated and rewarded.

The birthday horoscope 2017 for the Capricorn personality predicts that earning money becomes tougher after the 20th and you have to work harder. Dealings in property and business will be beneficial. There will be all-round improvement of finances of the family and your spouse will contribute to the general prosperity.

The April 2017 horoscopes predict that the lunar Eclipse of April 2017 will have an impact both on your friendships and love relationships, Capricorn. Pending issues will come to the fore and require clarification and changes. Strong Capricorn love partnerships are likely to continue while weaker ones may vanish. There could be marriages as well as break-ups. There may be babies born or miscarriages in April 2017 for the sea goats.

Renovations and beautification to the house can be done till the 20th of April 2017. There will be plenty of partying and family functions, and family environment will be harmonious. The Capricorn mother or Capricorn father’s relationship with children will be pleasant and you will enjoy their company. You tend to do most your business from the house.

The April 2017 Capricorn monthly astrology forecasts predict that your health will be problematic till the 20th. Work smartly, conserve your energy and take enough breaks. You should attend to the essentials and hand over the rest to others. Vitality and physical fitness will show an uptrend towards the month end. Here are a few healthy snacks and foods to flush toxin from your body.

April 2017 Capricorn horoscope predicts a month of extremes when it comes to love but a favorable professional life.