Aquarius April 2017 Horoscope predicts that you can design your own life and work hard to achieve your objectives this month. Personal enterprise and self-will are important and you are not dependent on others. There is no need to adapt to others.

However things change and planetary strength will move to the western sector for the Aquarius personality in April 2017. You have to seek the cooperation of others and you have to make necessary compromises if you have to succeed in life.

The Mercury Retrograde of April 2017 will have a bearing on your academic activities. Students will have to face disturbances in their studies. 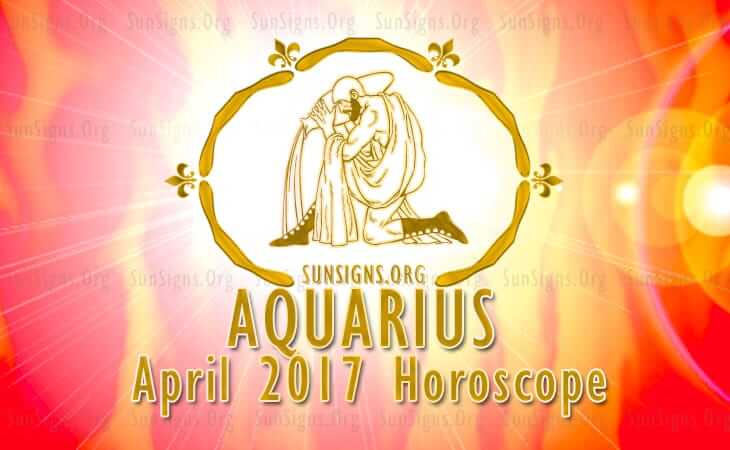 The Lunar Eclipse of April 2017 is happening in your House of Career, Aquarius. There will be modifications in your professional life. This may involve change in job description in your present job or a shift to another organization. You may even go for a different profession or business. The Aquarius zodiac sign will probably opt for a less strenuous job so that they can spend more time with their family and have mental happiness.

The 2017 horoscope also foretells that there will be a temporary emergency in your monetary situation around the 20th of April 2017 which you will be able to tide over. After that, the Aquarius born may go in for partnership with a new person.

The Solar Eclipse of April 2017 will interfere with the Aquarian’s rapport with their neighbors and family members. Defects in your marital life will be revealed and will require corrective measures. If your present relationship with your spouse is solid, your marriage will continue. You might even have a child if you are planning for one. Otherwise there may be a divorce in April 2017 for the Aquarius sign. Get your 2017 numerology horoscope.

The April 2017 Aquarius monthly forecasts suggest that love is excellent till the 20th of April 2017. You prefer relationships with spiritually oriented senior adults. You are looking for scholarly people with whom you can interact on an intelligent plane.

Conflicts will arise in your sexual relationships towards the end of the month. This may even lead to a separation or a broken heart. You are looking for pure love and caring in the partnership which will give you your space in the April month.

The Aquarius April 2017 astrology predicts that your health will be wonderful for most part of the month. After that, you must rest and relax sufficiently to maintain your fitness. The Lunar Eclipse will bring about long-lasting alterations in your diet and fitness routines. Your body will guide you in this matter, and you will follow the appropriate regimes.

The Aquarius horoscope for April 2017 foretells changes in your job and a few issues in your love life that need to be solved.