Scorpio April 2016 Horoscope predicts that you should keep your focus more on domestic issues and emotional affairs this month. Personal achievements will take a back seat for the time being.

Scorpio, majority of the planets are in the Western Social sector of your birth chart. Social charm and flexibility will be necessary to attain your objectives. This is not the right time to assert yourself or forcefully follow your ideas. 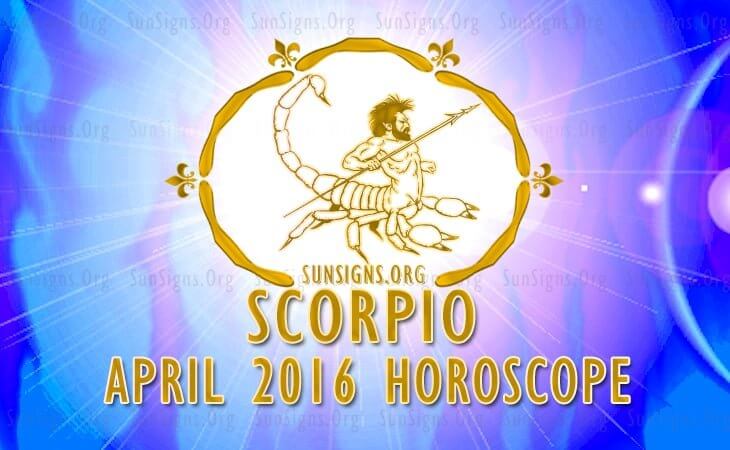 The Scorpio monthly horoscope for April 2016 foretells that planetary positions are gradually becoming favorable for career and business. You should begin implementing your career strategies.

You will get an opportunity to assess your professional growth and make suitable changes. If you are looking for a new job opportunity, situation will be excellent after the mid month. Prospects are bright overseas or in companies with foreign origin.

The Scorpio astrology forecasts for 2016 April, suggest that you have the backing of the whole family and friends for the implementation of your monetary goals.

Earnings will be fabulous, but you may not be happy with the pace. You should concentrate on planning future projects and start the ground work for executing them at a later date. They will become profitable slowly and gradually.

Love will revolve around family during April 2016 for the Scorpio zodiac sign. Singles will find romantic possibilities in family circles or with the help of family members. Married Scorpions will find love to be more delicate and sensitive. Small things may get blown up unnecessarily and may affect the harmony between Scorpio couples. Solve all these minor issues before planning for a child.

Single Scorpions will be more interested in love affairs for fun and entertainment in April 2016. Firm commitment will be missing in these liaisons. During the last week of the month, Scorpio people may find love while you are chasing career goals, or in influential social circles. Existing relationships will continue to blossom with excellent love compatibility.

Health will be wonderful during the month till the 20th April for the Scorpios after which some caution is required. This is mainly due to professional stress resulting from your involvement in some important ventures. Proper food and enough rest will enhance your health, if you do not wish to become victims of high blood pressure or cholesterol risk.

To control, the April 2016 Scorpio horoscope predicts this is a good month for family related activities as career issues will not be high priority.