April 2016 Pisces Horoscope predicts that planetary combinations for career are not auspicious for the month. Naturally domestic affairs and emotional life will hold sway over career and professional matters. You can utilize this time to make an appraisal of your career progress and formulate new plans for the future.

Majority of the planets are in the Eastern half of the chart towards the mid heaven. Independent actions based on personal enterprise will dominate the Pisceans in April 2016. You can use your innovative skills to create the world you want. There is no need to depend on others and you can be aggressive in your approach. You will enjoy the fruit of your hard work in days to come.

Your personal looks and fashions will be enchanting and exceptional due to the influence of planet Venus. Pisces women will specially splurge on dresses and fashion accessories to look glamorous in April 2016. Aloe vera too is an excellent home remedy that can give you beautiful skin. 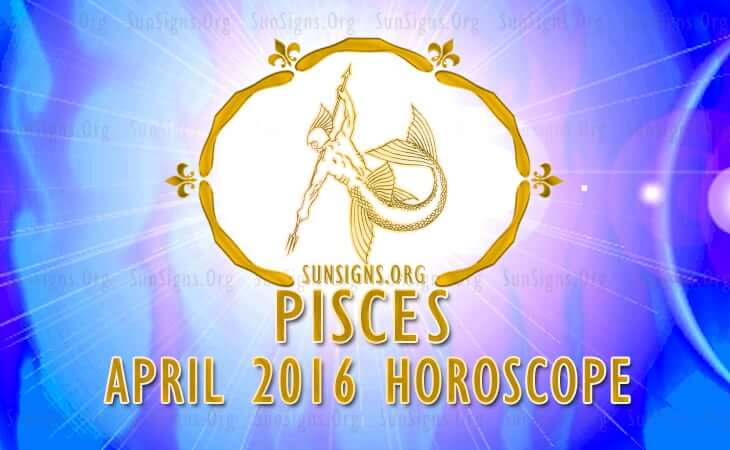 The Pisces 2016 April astrology forecasts suggest that you will be engaged in a big business project which will drain your resources. You will have a problem in facing the various contradictory situations that may arise while executing the new venture. Even people in job will reach a deadlock situation that they will have to successfully navigate.

Financial position for the Fishes will be excellent till 20th April. Your income will come from your profession and with the help of your social contacts.

Businessmen will forge new partnerships, and people in medical profession will have strong earnings. Planetary periods in April 2016 are propitious for making speculative investments for the Pisces. Your financial ventures will have the encouragement of your spouse or love partner.

The Pisces love horoscope for April 2016 forecasts that singles will find love chasing them and they will have no problem forming new romantic alliances. There will be plenty of warmth and passion in the Pisces sexual affairs.

Relationships will be highly perceptive and you have to be gentle and caring with your partner. Idealism and imagination will dominate partnerships. People already in committed relationships may face challenges.

Family relationships will be highly volatile at the time of eclipses and you have to be highly tolerant to face the unpredictable behavior of family members. That is not a good time to marry or have children.

Health will be fabulous for the Pisces in April 2016 and you can maintain your fitness by alternative therapies. You should focus more on mental toughness after the 20th. Fitness and diet regimes will undergo a change due to the influence of the Solar Eclipse.

To conclude, the Pisces April 2016 horoscope suggests that career might be a little tough, but with others’ support you will be able to overcome all obstacles.