Libra April 2016 Horoscope forecasts the predominance of domestic issues as most of the planets are in the lower half of your horoscope towards the nadir. However the position of Mars in the house of career after the 14th April makes career dominant.

The presence of most planets in the Social Western half of the birth chart makes your social charm and skills necessary for success in life. Independence and personal initiative are important but help from others will be essential for growth during the month. Social life for the Librans will be hectic and will reach its zenith during the month. 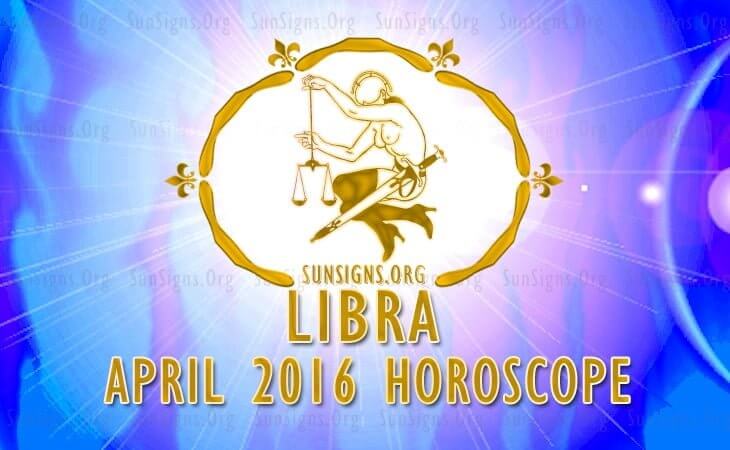 The April 2016 Libra monthly astrology predictions foretell that there are good chances of moving to another job during the month. Whatever changes come about, they will be abrupt. The Libra zodiac sign businessmen might start a new venture.

The 2016 horoscope also forecast that planetary aspects are not favorable for the Libra finances during the month. Your earnings will not come down, but they will flow rather slowly. All major investments and expenses should be scrutinized carefully. You have to spend your energies in sorting out major irritants related to cash matters.

Your financial strategies will have to be revisited and new contracts require plenty of spade work. Financial situation will be excellent till the 19th. The people under the Scales zodiac sign will have major expenses on family and travel in April 2016.

Love and social life for the Librans will be very much vigorous during April 2016. Libra love will be warm and somewhat unrealistic. You want committed relationship with your love mates. Love will bloom overseas, in religious places or while pursuing education. The 2016 Libra monthly forecasts suggest that divorced people will get fresh opportunities for marriage.

If you are already in relationship, the partnership will weather many challenges that it may face. You will like to associate yourself with influential people and in the process you may encounter love opportunities.

The Solar Eclipse may be auspicious for singles and marriages are likely. Your spouse may be interested in pursuing her career interests and your career itself will get a boost from your spouse. This is an auspicious time for the Libra personality to expand their family through marriage.

Health will be fragile till the 20th April for the Librans and requires more attention. You will be looking to modify your fitness and diet plans to suit the changing needs. Spirituality will help you to overcome health problems. Cut down on sugar and red meat and increase intake of green vegetables like broccoli, kale and spinach.

To conclude, the April 2016 Libra horoscope foretells that this is a good time to improve your zodiac compatibility with your partners.