April 2016 Capricorn Horoscope foretells that professional issues are not important while home affairs and emotional matters will dominate your life during April 2016. Personal ambitions and how people perceive you will not be in focus for the time being. Emotional strength is necessary both for your career as well as for all the aspects of life. This will probably happen after the 16th of the month.

Capricorn, right now your personal efforts will be successful but in days to come you have to depend on social grace for attaining your objectives. 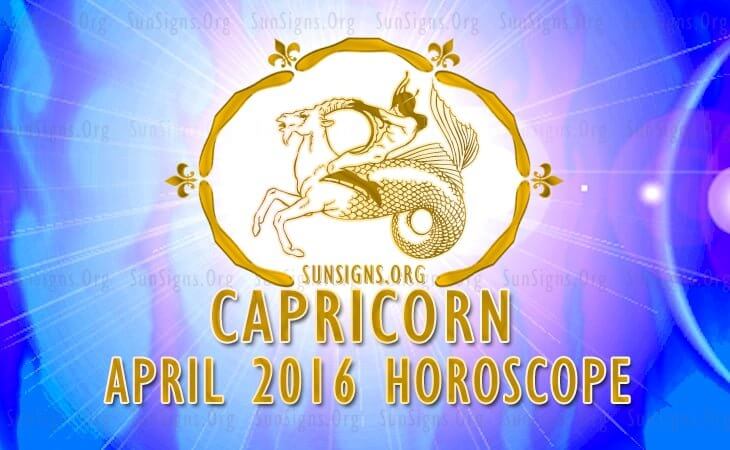 Career issues for the Capricorn astrology sign will be in the background as planetary positions are not favorable. You should use this period for working out plans for the future and work hard on present assignments.

If you are seeking a job or planning to start a new business, social connections and family influences will help you find good employment.

The Capricorn 2016 April predictions suggest that financial position will be exceptional during the month. Earnings depend on good sales and marketing efforts.

Family members, government dealings and career rewards will contribute to the kitty. The time is auspicious for solving legal financial problems with government agencies. The Solar Eclipse of the 19th will impact your savings and budget. Your investment plans will also be affected.

The Sea Goats will feel the influence of Mars in matters of love during April 2016. You will be more dynamic and forceful in forming love partnerships. Singles may fall in love instantly and these relationships are more for enjoyment and one night stands. You might even fall in love with your girlfriend.

Married relationships will be turbulent for the Capricorn personality and the appearance of an old love mate can create more problems. Sex and passion is currently missing. This is not a good time to get pregnant.

Meddling by senior family members will disturb the harmony of your personal relationship. During the first and last weeks of the month, you have to be tolerant towards family members as there is a Mercury retrograde towards the end of April 2016.

Capricorn, you have to be cautious about your health till the 20th and try to conserve your vitality by good relaxation. The Capricorn can augment their health by a fitness regime supported by spiritual healing. Radical improvement in health after the 20th April is indicated.

To conclude, Capricorn 2016 April zodiac forecasts suggest that you have to stop being emotionally vulnerable in order to succeed in this world.