Aquarius Horoscope April 2016 foretells that planetary aspects are favorable for family affairs. Hence career and personal accomplishments are on the back burner. Home and emotional matters are dominant during the month of April 2016 for Aquarius zodiac sign individuals. Career goals and paths require an appraisal with the help of emotional stability.

In April 2016, personal initiative will be necessary to succeed in life. You can decide on the course of action and create your own destiny. There is no need for collaboration and compromise. Social skills are helpful but not absolutely necessary. 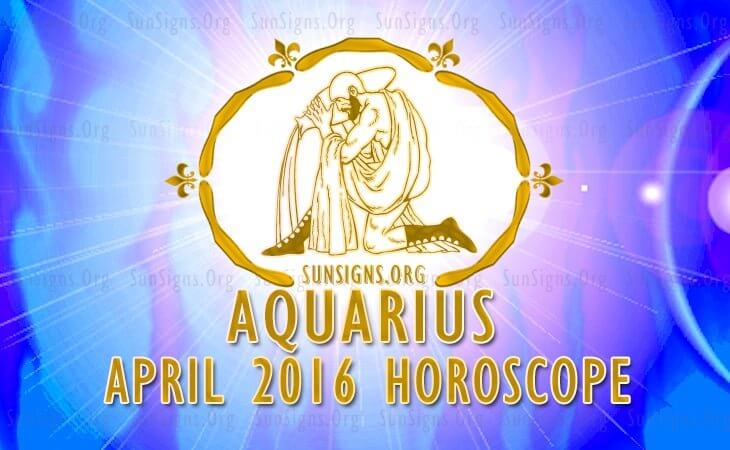 The April 2016 Aquarius monthly forecasts suggest that planetary positions are not beneficial during the month for new jobs or business. You can use this period for visualizing your future course of action. People searching for jobs will have a successful period.

Financial position is outstanding during the month for the Aquarius personality. Risky investments will be profitable till the 16th April. Investors will reap good benefits if they put their money in real estate dealings. Family members will encourage your efforts to save and make money.

Single Aquarians can find romantic opportunities in the neighborhood or while pursuing their academic career. Family circles will be another source for finding love partners in April 2016. You may make love connections with old friends. After the 20th, spiritual differences may be a hindrance for the existing liaisons. Harmony can be restored by making suitable compromises.

Married Aquarian couples will seek rational mates till the 20th April and look for emotional support from their partners after that.

The Solar Eclipse of 19th April makes significant changes in relationships. Your relationship with family members and neighbors will see radical changes. There will be some conflict between members. Marital partnerships will be stressed out and only real strong ones will survive. Singles will have to take a decision on their commitments to their relationships. Plans to get pregnant might need to wait.

The Aquarius 2016 April astrology forecasts predict that health will be remarkable till the 20th and requires suitable care after that. Health can be boosted with regular fitness and diet routines. Cleansing of body of toxins will improve your health. Muscle sprains and other aches will need to be taken care of.

To conclude, the April 2016 Aquarius horoscope forecasts a month of planning and preparing for the future.