Pluto in the Second House of the Natal Chart

What does Pluto in the 2nd house mean? You are financially very astute.

It all comes down to finances and material possessions with Pluto in the second house. Your intuition toward acquiring wealth is impeccable. You place tremendous value on your home and the things in it, and you fear losing them in some way. You can’t stand feeling helpless or hopeless.

Pluto represents power, regeneration, desire for control and obsession. The second house ruled by Taurus star sign, is logical and practical. So you aren’t that focused on your growth as an individual. You would rather put your effort and concern toward building a stable foundation upon which to build your life and your family. The one thing you can control in this case is your career, and you work hard to obtain the things that matter to you. 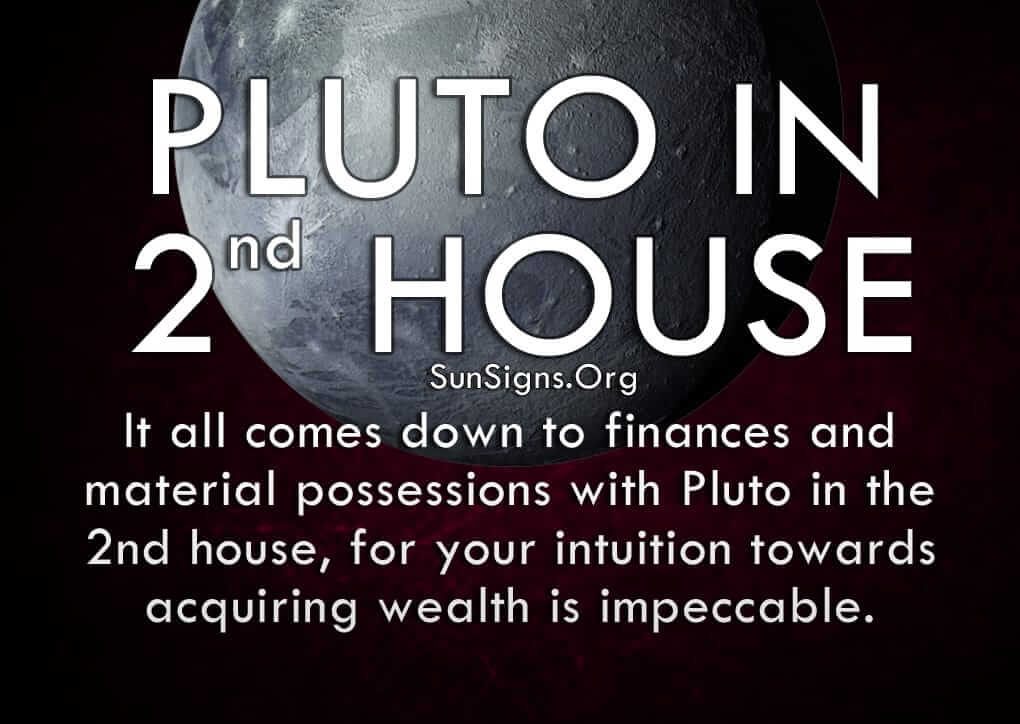 With Pluto in 2nd house, you feel a strong pull toward anything beautiful or aesthetically pleasing, and you want to be able to afford these things. And you want to have a secure home environment where you feel safe and comfortable in your marriage. This is something over which you are quite protective so that no one can take away that sense of accomplishment and satisfaction.

Trust in your instincts for they are good ones, especially when it comes to finances. Other people most likely come to you for advice on these matters. You know a good value when you see one, and that is an immeasurable asset. This depends totally on your Pluto sign.

Ownership is significant to Pluto in the second house personality. You can be overly possessive of your wealth at times. But this may come from something in your past, a person, place or thing you lost that made an impression on you and your memory. It was this event, or series of events, which made you want to hold onto anything you deem important or even precious. And that kind of thing may happen again and change your view in a different manner. As you get older, the things that are important to you will most likely change, as will your priorities.

It’s okay to roll with the punches in this manner. That’s often the healthier way to go. You can be too stubborn for your good at times, and this keeps you from moving forward in your life. You’re so good at planning for the future that you refuse to let anything alter your vision. But you have to learn to embrace change if you want to mature and reach spiritual enlightenment, or else you will remain stagnant for too long. And that’s never good for anybody.

With Pluto in 2nd house, you may be unable to see when something new is just as good for you, if not better than the alternative. You have to learn to be more open to people and places that are unfamiliar and be willing to try something different. You never know when that could lead to a better financial opportunity. You can’t plan for everything, and life’s little surprises don’t always have to be negative.

Besides, it’s all in the way you perceive your situation and react to it. Know more about this from Pluto symbolism. You do have control over your actions, so utilize your logic and reasoning to determine the best course of action for you. And if that means going in a different direction than you previously planned, so be it. Look inside yourself for the right answers – you’ll be surprised what you find there.